The Hope angel card reminds you of the importance of your dreams and wishes. Even if the period of your life which you are right now experiencing is not ideal, hope will give you the right motivation to keep going. You are going to discover a new direction or a new vision. There really is the light at the end of the tunnel. Angels want your steps to lead you towards better future and are therefore trying to show you what real goals are. This card will help all those who feel helpless and are in despair.

Q: What awaits me in the coming days?

The Hope Angelic Card says that you should not look the near prospects with rose coloured glasses. Hope for a better tomorrow will be the main motivation that will give the questioner a lot of energy for surviving the unfavourable period. The angel depicted on this card is the guardian of hope that will help you realize that you are not alone for all the sorrows. (Note: indeed, the week after the reading of this angel card brought a period when the questioner was extremely exhausted, struggling with an unprecedented headache and at the same time bombarded with increased demands – indeed, there came a period of despair where this angel card played a positive motivation role. The angel of hope was like a bright star in the sky that shows the right direction in the dark.)

This angel card is exhibits "The Angel Praying in the Garden of the Olives" painted in 1840 by a French painter Théodore Chassériau.

The angel chosen for The Hope card originates from a painting that was created as one of the studies for a later work called 'Christ on the Mount of Olives' (1840). Jesus was visited by three angels: the first with the chalice, depicted in the lowest part of the painting, by the second angel in the middle (main theme of the study); and by the third angel supporting the cross, shown in the highest part of the painting. The two angels in the corners symbolize Christ's suffering, while the angel in the middle brings strength to endure the torment from heavens.

As part of the preparations, Chassériau painted study for each of the angels. These are mostly in private collections,however, one can be found the Princeton Museum. It is this particular angel that brings hope and symbolizes a positive starting point even in the moment of mental and physical suffering. 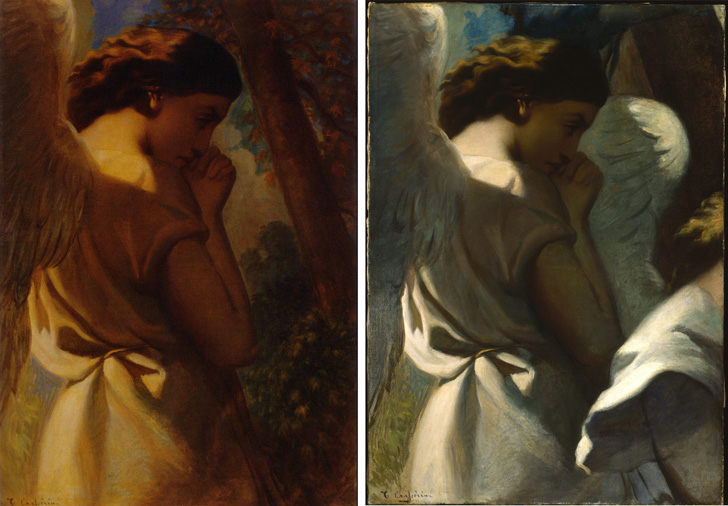