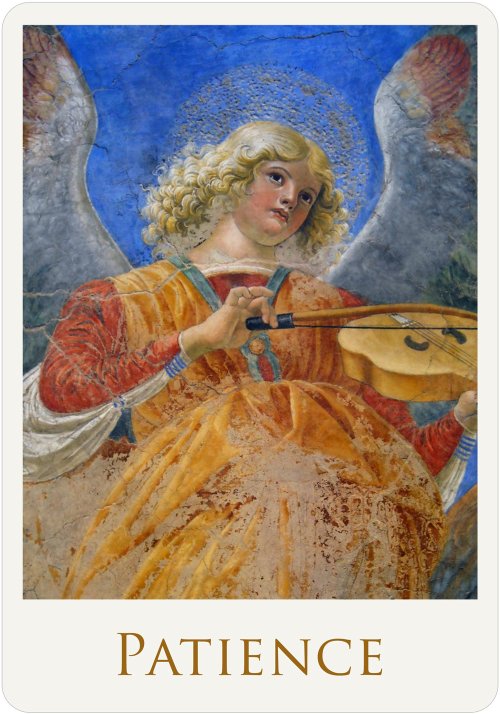 The Patience angel card encourages you to take a break. If you desire something strongly be it a desire for property, work or partner, now is the time to turn the intensity down. Angels are warning you about the consequences of your eagerness. Only the one who is patient will attain the desired goal. And only the one who is not blinded by his own impatience is able to see his goal correctly and clearly. This angel card encourages you to slow down and act with caution. Angels will also help you if you are too passive and lack any commitment.

Q: What will be typical for the coming week?

Patience is the Angel Card reminding you that happy life is often accompanied by renunciation and asceticism. Human being differs from animals because he or she is able to plan – one can give up many immediate delights, with a much greater reward awaiting later. For example, if you deny a pack of cigarettes every day, you will save up to few thousand dollars a year for which you can buy for instance a luxury trip to an exotic destination. The Patience Angel Card also appeals for better self-control and humility, when facing long term aims. During the following week, you are likely to be tempted to interrupt or terminate some long-term activity or project. But the Angel Card is a strong ally and will help you overcome the feelings of hopes becoming futile. Whether it's a long-term relationship, a study, a project, or a vision, you should gain new strength and go further ahead. Remember that even Rome was not built in a single day.

Q: How should I support my creativity?

Well, creativity is a question of talent but also of chance. There are days when it rains and days when the sun shines. Creative skills cannot be controlled 100% similarly to weather. The Patience angel card says: When it rains, you take an umbrella – and when you don't have the right idea, you have to wait for one to appear, just like the sun in the sky will start to shine. Short cuts (narcotics, impatience, explosion of anger ...) will not help for long, if at all. Rain is life-giving, and it is a period of time that will make it hard or even impossible to work outside. But it also boosts later productivity (metaphorically: growing crops). The interpretation of the Patience angel card could therefore be following: if you feel the lack of creativity, wait and practice self-control. Even if it is not visible now, the future seeds of creativity are already germinating underground (in your unconscious) due to the rain.

This angelic card exhibits the painting "Music-making Angel" created between 1480 - 1484. It was painted by an Italian painter Melozzo da Forlì.

We have an angel in front of us looking mild and patient, which are the qualities necessary to cope with a challenging musical instrument. A violin and a fiddlestick held by only three fingers are displayed in a certain "airy" position, as if the instrument is playing by itself and the angel, who is looking into the distance, was only directing his tones.

The Music-making Angel is a very interesting artistic achievement, especially due to the unusual perspective which is quite rare for 1480. The angel is leaning a bit - the lower part of his body is wider because it is closer to the observer, while the upper part slightly narrows as it is reflecting the distance from the observer.

It is a fresco that was painted between 1480 and 1484 in Basilica of Santi Apostoli in Rome. The Music-making Angel with a violin is a part of a larger whole of music-making angels which decorated the apse of the above-mentioned building. However, the frescoes were removed in 1711. They were divided into 16 separate parts and placed in the Vatican Pinacoteca (room IV). The commissioner requesting the painting of angels was Cardinal Giuliano della Rovere, later known as Pope Julius II. 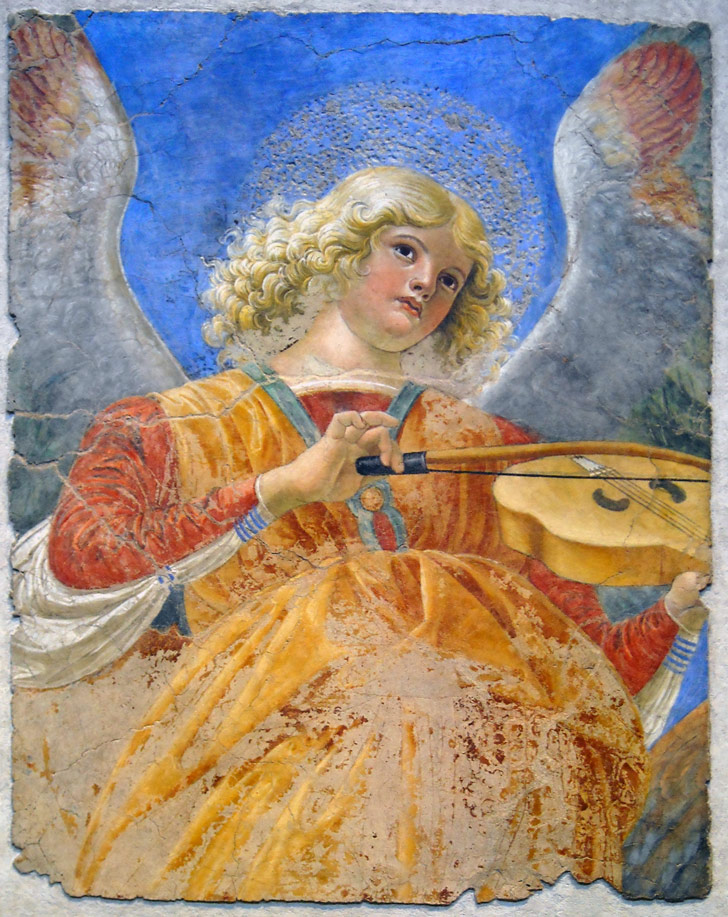